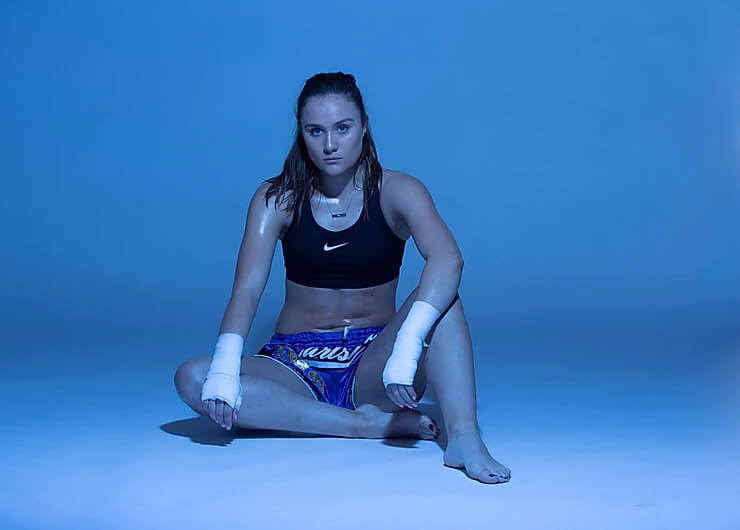 Carlsbad Kickboxing Club’s Reily Allen started Muay Thai when she was 13, just turning 14. Currently 17 years old and graduating high school in one month, we talked to Allen about her big plans for the future, overcoming obstacles and advice for young girls entering the sport.

Carlsbad Kickboxing Club: In the four years that you have been fighting, you have won 11 fights and won the 2015 IKF World Champion at age 15. What made you start Muay Thai in the first place?

Reily Allen: The reason I started the sport is because I want to become an FBI Agent in the future. When I was younger, I asked my dad what FBI Agents do for fighting and he gave me two options, one of them was Muay Thai. My first trainer ever was Rolando and after more than four years he is still my trainer.

CKC: How has Muay Thai impacted your life in the four years you have been fighting?

Allen: Muay Thai has impacted my life in the greatest ways. I definitely have matured greatly from it and as well as it’s made me see the world differently. I have a better view of what it’s like to be a fighter as well of all the hard things you go though and all the things you miss because you’re so dedicated to the sport.

CKC: What is the biggest obstacle you have faced in your boxing career and how have you overcome it?

Allen: Definitely losing confidence. Some fights just don’t go your way. I have learned that having confidence is key in Muay Thai because it is what makes you so great. To overcome this, I started sparring a lot and realized that I just messed up and that is ok. Everyone has room to grow. In addition, my team mates and trainers had my back and told me that I was something great and I believed it.

CKC: Tell me more about your future plans to become an FBI Agent and how Muay Thai has helped you in your career goals.

Allen: I plan to go to college after I graduate and still have the goal of becoming an FBI Agent. The sport has helped me prepare in many ways. It has taught me how to fight—so I already have self-defense under my belt. In addition, it has helped me mature a lot.

CKC: For those who say Muay Thai or boxing is a make sport, what would you say to young girls interested in fighting?

Allen: Girls can do everything that guys are capable of. I would tell those young girls to not ever let the statement of “only guys can do that” get in your way because you never know your true potential unless you try.”

CKC: On that note, what do you think will be the biggest challenge for the next generation of young girls following you?

Allen: The greatest challenge for the next generation of young girl is going to be making a career out of the sport. If you are good at Muay Thai or MMA you will be recognized because such few girls are good at fighting, so when one comes around, they really stand out.

If you are interested in checking out Carlsbad Kickboxing Gym, Click here to try a class for free to see it might just be the vibe you are looking for to pump up your fitness routine.