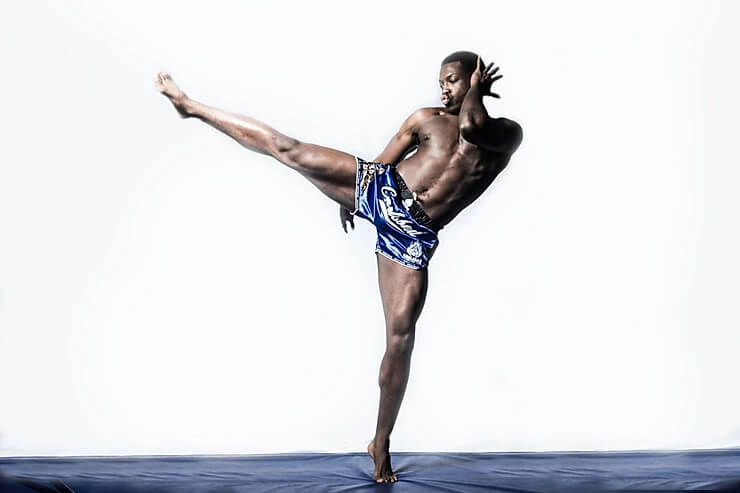 Adversity is a part of every athlete’s climb to the top. Arthur Barber’s journey is no different. The former football star who never dreamt of fighting for a living fell into this passion by chance but soon after discovered this is was his calling.

“I began training in 2015,” said Barber. “I never wanted to train Muay Thai or martial arts in general but since I was done with football my mother wanted me to do something constructive rather than waste talent.”

Barber, is a 21-year-old Muay Thai competitor living in Oceanside, California, and training at Carlsbad Kickboxing Club. His childhood wasn’t filled with beautiful weather, miles of beaches and high-end training facilities. Barber was born and raised in Southside, Chicago. Being one of seven children in an urban environment with a lack of educational and financial resources. However, the passion and determination Barber exhibits in the ring, quickly proves why he is now on the path to stardom.

However, stardom doesn’t come easily for even the most talented athletes. The road to the top is paved with many obstacles internally and externally. Thus far in Barbers short career, he has experienced both.

“In the beginning, it was easy to get discouraged,” said Barber. “I failed to realize motivation is like a drug. It’s very temporary it comes and goes as it pleases. So, the main goal is to stay disciplined and continue to be consistent with my daily training and healthy lifestyle choices.”

Waining motivation and internal questions were just a temporary hurdle for Barber to get over. Once he found his groove, he trained hard, fought hard and was rewarded with success in the ring. Barber took that same ferocity and focus to push himself to train for the US Muay Thai Open (USMTO) tournament.

Just when the path ahead of him seemed clear and he had the mindset and support needed to reach his new found goals, adversity reared it’s head once again in an unexpected fashion — one he nor his trainers could ever predict.

Ready to get after it and make a name for himself in the ring, Barber waiting patiently for his turn to prove himself, however, that turn would never come. Barber was disqualified when the tournament decided, for the first time, to start counting point kickboxing (PKB) fights, putting them towards a fighter’s ring record. PKB fights typically are not counted as real fights. Not being aware of this rule Barber had five PKB matches that weren’t added to his, in-the-ring record.

Though these rules were never previously disclosed to Barber or his training staff. At that moment everything went down the drain, the waking up early, uncomfortable eating schedule, rigorous training schedule; in an instance, it was all for nothing. This dealt a heavy blow to the fighter who put everything on the line for this opportunity.

“I cried, I cried hard. I sobbed out of anger and frustration,” said Barber. “All the sacrifices I ’d made to get to where I was, those sacrifices were cut short of my dream and I was labeled a cheater along with me and my coaches name being drug in the dirt. It was a nightmare for me and family.”

Though this news was a huge setback, in the grand scheme of things this will be a minor in the mind of Barber. He’s already set his focus on getting back to the place where he feels he deserves to be. Barber will now fight in A-class, competing against fighters who have two to three times the experience he has — but he’s ready and willing to show them this is where he belongs.

“I have to bring my heart and everything else I can in that ring to pull off those same wins this time around,” said Barber. “I’m hungrier than ever and after a year off, I mean business.”

Barber has big goals and aspiration and he plans on accomplishing them all. He’s training daily at Carlsbad Kickboxing Club, waiting for his opportunity to prove himself to the Muay Thai world. At this point, nothing can stop him, but himself and he sees himself with the championship the belt sooner than later.

“[In five-years] if not the champion of them all, I see myself as the #1 contender on multiple major Muay Thai and kickboxing promotions. I also see myself being a part of The USMF [United States Muay Thai Federation] competitive team, fighting and representing the country we call home. It’s one of those things I don’t think or hope about, I just know.”