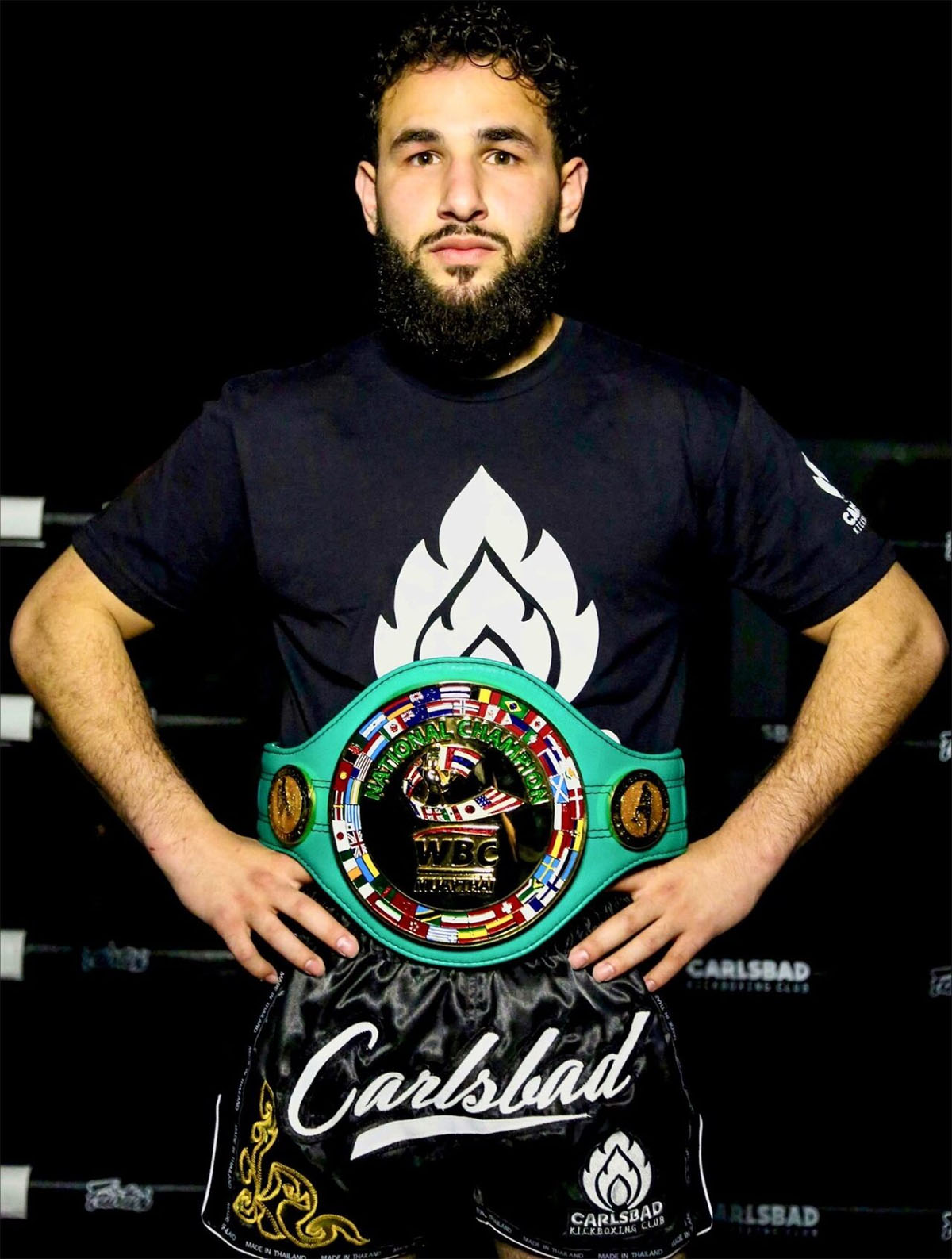 Ahmad Ibrahim is the newest addition to the CKC team. Originally from Palestine, the Philadelphia born and raised fighter moved to California in hopes to further his knowledge as a coach while getting out of his comfort zone in Philadelphia.

He began training in Tae Kwon Do in 2000 when he was only five years old and trained for about 11 years, eventually earning a 2nd degree black belt. His journey in Muay Thai began in 2009 and he had his first fight in 2010, made his professional debut in 2016, and has been fighting actively ever since. Ahmad also wrestled throughout all of high school.

“I was raised in a martial arts family, given my uncle, Rami Ibrahim, was my coach,” he says. “I was pretty much forced to train and I wasn’t the biggest fan of martial arts until I got older and realized how much it changed my life for the better.”
In September of 2021, Ahmad achieved his childhood dream and became a WBC National champion. Although that title is his biggest achievement, he also holds about 16 titles mixed with his professional and amateur career. (Alongside two WKA gold medals, one IFMA gold medal, and one IFMA bronze medal all for team USA.)

“Something that I hold dear is competing in the Madison Square Garden arena and being the only Palestinian to ever compete in ‘Glory Kickboxing’ at the time,” he says. Ahmad has also competed numerous times in Thailand, Italy, Chile, Colombia, Mexico, and South Korea.

While he has spent all of his life in Philadelphia training under his uncle, a man who he says is “a very big deal in American Muay Thai,” one is his goals this year is to expand his knowledge as a coach. “Not that this isn’t achievable to do back home, but I think putting myself out of my comfort zone would benefit me to see how the world truly is and how it is to be a coach.”

As for his current home at CKC, Ahmad says he really enjoys the atmosphere. “It feels very family oriented, they definitely made me feel at home and welcomed me with open arms,” he says. “From the staff, coaches, to students, everyone is so supportive and kind. It’s a big plus that Rolando and my original coach Rami are very good friends. It makes things much easier and simpler for me.”

While he has everything he would need to succeed as a coach back home, he is looking forward to his West Coast journey and what is to come. “I definitely still plan to compete, representing Rami Elite alongside CKC.”
As to when we will get to see him in the ring will all depend so we will just have to wait and see. “I’ll be in the ring … I’m still adjusting to the training and coaches here so whenever Rami and Rolado think I’m ready is when I will fight.”